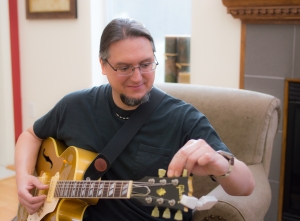 Mike Loce, originally from the city of Revere, Mass, USA, now resides in New Hampshire and has been living as a professional musician/guitarist/educator/director since 1994.

He attended Boston College High School, and while still a student there, also attended Harvard University Extension School, for a program called Physics of Sound and Matter.  This led to an excitement of creating varied sounds and experimentation with music technology of the day, utilizing his talents. After college at UMASS Lowell, the desire to compose original music and to achieve high levels on his instrument took precedence in Mike’s life.  He abandoned the way he’d previously done things and set out on an inspired Loce Course of both musical and philosophical development. For fun in his 20s he also got a Bartending Certificate at Bunker Hill Community College in Boston. 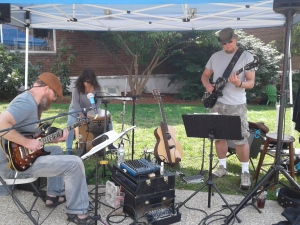 Through years of odd jobs while pursuing his music dream, finally all employment appeared in the field of guitar in 2000 with Parker Guitars, a technical position.  Mike then appeared with musical troupes such as Boston Rock Opera, and for four years he supported and helped develop a small online company called Personal Guitar School/Learn Music. Inc, later to become Sam Ash Music Institute. Other New England businesses that have hired Mike to help develop their vision of music education include Music Academy of Chelmsford, Merrimack Music Academy,  BLT Music School, HEI Music, Music Elements, and Nashua Community Music School.

Throughout these years, Mike recorded a variety of compositions with many talented performers and musicians.   Previous music projects include SuperKava Music and The DoubleNecks, and current projects are The Creatives, The Ukestra with Mike Loce,and Weather Control Blues Band.

(The current music acts are diverse (CREATIVES, UKESTRA, WEATHER CONTROL), entertaining and can be hired for a multitude of events, please contact if interested..)

Mike is a registered songwriter and music publisher with ASCAP.  He currently works in the Merrimack Valley of Massachusetts and New Hampshire… teaching, composing and arranging, performing, and doing recording sessions. He is a notable and respected musician and educator who shares the enthusiasm of music with all his band-mates, listeners and students.

Tammy and Mike in The Creatives.

Mike thanks the students, friends, and colleagues he has met on his musical journey thus far, and welcomes contacts from those interested in his services in music and the arts.

I first formed the UKESTRA in 2011

Custom Guitars and Basses made in Germany 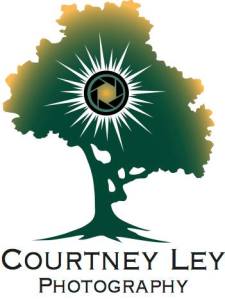 A good friend who does excellent work

I have performed with The DoubleNecks since 2007

These are great pedals

If you know what KAVA is, here you go